It takes a very special young stallion to turn my head enough that I use him on my mares instead of a proven Grand Prix horse. In 2018 I saw video footage of a rubber ball powerhouse of a 3yo, moving like a young Valegro. He was called Escamillo. He blew me away.

I couldn’t go over to Germany to see him in person so did the next best thing: contacted his owner to find out more about him. She is Kimberly Davies and she is extremely kind and very helpful. She answered all my questions, sent me video of her riding her wonderful stallion and was clearly genuinely thrilled with the temperament, work ethic and paces that Escamillo was showing.

Breaking every rule in my breeding book (they must have competed at GP, I must have seen them in real life) I ordered some Escamillo for Raica. She took first time and just over 11 months later a big bay colt was born. And he is FABULOUS! He looks just like his sire. I think he is the biggest moving foal I’ve bred so far. He has never been advertised as he is not for sale but I have had 6 enquiries from people wanting to buy him and 3 of those came from Germany.

Eddie gained a gold premium at the Futurity as a foal. He is being run on as a stallion prospect as he as everything you could want in a stallion: huge movement, lovely temperament and a world class pedigree. 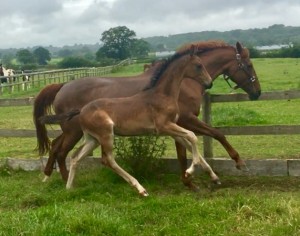 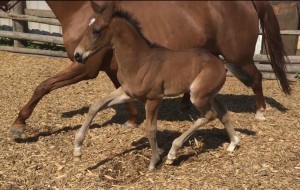