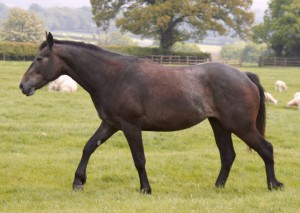 2012 grey filly by Uptons Deli Circus (European gold medalist in eventing by Shaab, still sound and competing when he was 22 years old).

Stolen Circus is a big, strong filly with bone and quality that stands 17hh. She has her sire’s wonderful temperament and conformation very similar to her dam Stolen Silver who had huge scope clearing 1m80 several times when out bloodhounding.

Stolen Circus is being retained as a broodmare. In 2015 she was covered by Persiflage, Anglo Arab, 3*** eventer by Primitive Rising. He is from the dam line of Tamarillo, William Fox-Pitt’s Olympic silver medallist and Badminton winner.

Her filly was born on Easter Monday 2016 and looks every inch an eventer. Dizzy has taken to motherhood like a duck to water. She’s calm and easy to handle, a lovely horse to be around. I can’t say enough good things about Dizzy’s temperament. She’s the sort of horse most of us want to own. Its early days yet but her foal seems to have inherited Dizzy’s quiet confidence and is friendly and inquisitive.

Dizzy’s first foal is going to be called Stolen Sunrise, Dawn to her friends. She already has a huge gallop and springs in her heels. She is bred for the top levels of the sport with 75% blood (TB and Arab) a splash of Irish and some of the most famous names in eventing in her pedigree: Primitive Rising, Shaab, Top Star.

She comes from a very strong dam line that has produced a 4**** Olympic eventer and a Wembley supreme champion. As much as I’d like to keep her, this filly is for sale. 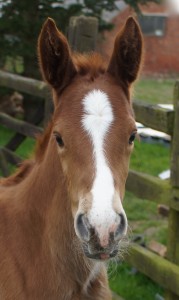 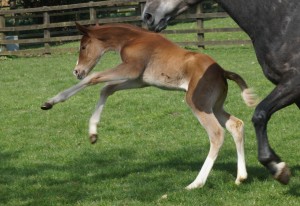 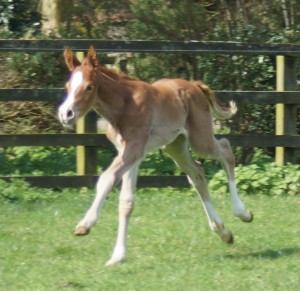 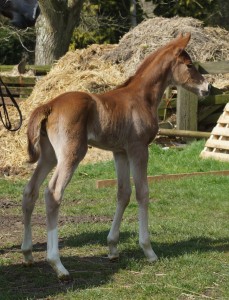 Dizzy with her 2016 Persiflage filly. 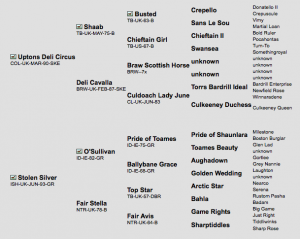