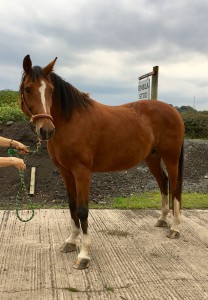 Amira joined my broodmare herd in 2017. As is often the case, I wasn’t looking for another horse when I saw her advertised on Facebook. She is the half sister to one of the best stallions ever bred in the UK: Boston who was champion of his grading, was ridden by Isabell Werth and has sired colts who have gone on to become premium stallions themselves, most notably Bernay and Borsalino. Amira is by the fabulous stallion Rousseau and competed very successfully herself. How could I resist?

She went straight in foal in 2018 to Belissimo M and had a simply gorgeous filly in April 2019. Her filly will be called Stolen Beltara and she is a mini-me of her mum. Beltara will be kept by the stud as a future broodmare.