Flammengold is by the famous dressage stallion Florestan, sire of world young horse champion Florencio. Flammengold has competed to Intermediare I himself and sired several successful Grand Prix dressage horses. Fabioso was national Intermediare I freestyle champion and national Inter II vice champion before going on to compete internationally at GP. Frank Sinatra Gold is a graded stallion who competes at GP level in Germany. His dam line has produced 18 graded stallions and was champion mare family in Hessen for 4 consecutive years. He is a hidden gem, not used for breeding as much as he deserves. He is 23 years old (2017) and is still competing at PSG and Inter I level. 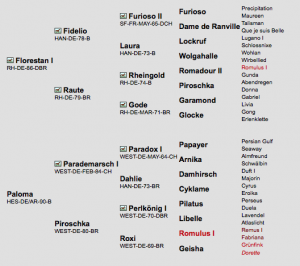